I had been waiting for Noctua to release the SP3/TR4 compatible follow-up to the dual tower cooler NH-D15. At Computex 2019, they said its release was planned for 1st half of 2020 (press release).

What they then actually released were colorful rubber dampers, and t-shirts. :-|

Now I saw this link in the igorslab.de forum: https://noctua.at/en/product-roadmap
I attached a copy of the current graph on that page. 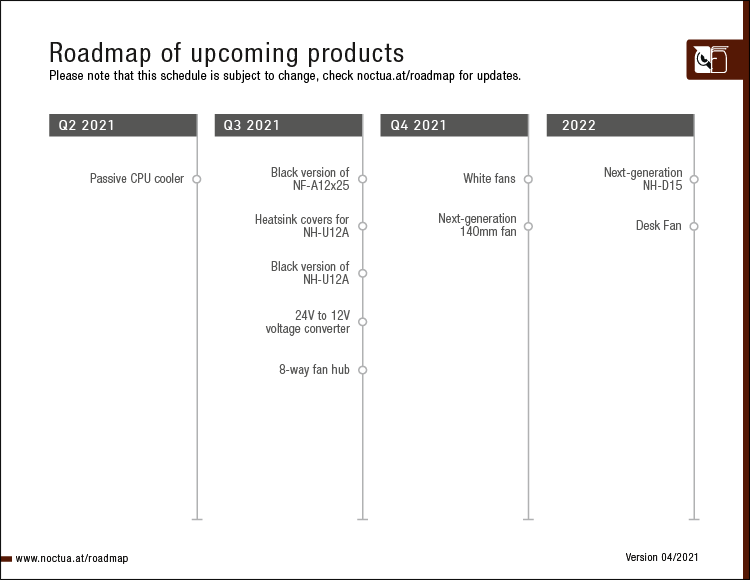 Most of their development seems to be on visual changes to the color of fans and CPU coolers and stuff. I do have one 'Chromax black' NH-D15, and it doesn't seem to cool any better than the original ones that are silver with brown and beige fans. I only purchased it because at the time it was cheaper than the standard NH-D15.
Top

To be fair, their product developers haven't been merely adding more colors but were also expanding their series of industrial fans. They now have fans with automotive qualifications.

I had first been using a Noctua CPU cooler on an Ivy Bridge-E build, the 14mm dual-tower cooler NH-D14. Satisfied with this one, I later used NH-D15S in several computers, including the dual Broadwell-EP builds. My intent in using these has been quiet cooling, and this was mostly achieved. On smaller CPUs for my main home computers, I used tower coolers with wider fin spacing = lower aerodynamic resistance instead: A Scythe Ninja on a 65 W Phenom II, and a Thermalright Macho on an 84 W Haswell Xeon E3.

A year ago when I built the dual 32-core Rome computer (with the 7452 CPUs with cTDP-low of 155 W, cTDP-high of 180 W), I was worried that the single-tower cooler NH-U14S — which was, and still is, the best performing air cooler for socket SP3 — would not work as quietly as I was used to from NH-D15S. Turned out that this worry was unfounded; the NH-U14S is not breaking a sweat even when the CPUs are set to 180 W TDP/PPT.

There is a downside with the default fan of NH-U14S in combination with the Supermicro mainboard though: When the computer is under light load (happens rarely; the computer is meant to be either BOINCing or off), then the fan speed can fall below the board's "fan fail" threshold, which lets the board go into panic cooling mode and spin all fans up to 100 %. There are a few awkward workarounds for this; mine is to simply disconnect the RPM sensor pin of the CPU cooler fans via an adapter cable.

So, the 32-core server CPUs can be cooled easily and quietly with Noctua's 140 mm single tower cooler. It's harder to keep the rest of the board components cool, notably the VRMs and RAM. I still did not put the computer into a case but have the board lying flat in a shelf or elsewhere. I currently have a 40 mm 5000 RPM fan from Noctua lying on top of the CPU-VRM heatsink, two 80 mm 2000 RPM fans from Arctic on top of one of the RAM banks where also two of the RAM-VRMs are located, and a 120 mm 1300 RPM fan from Noctua on top of the SSD, NIC, and BMC. (All fans are PWM controlled by the mainboard, therefore run at about 60 % speed under load = reasonably quietly.)

But depending on where the computer is located (or if I ever put it into a case), I also need to force air flow externally with more fans, ideally in the front-to-back direction of the mainboard. I am still in the process of trying out different fans for this purpose.

Anyway; back to the topic of CPU coolers: A year ago I had a build with either dual 32-core Rome or single 64-core Rome in mind. One of the reasons which then made me decide for dual 32-core was that the only available SP3 dual tower coolers performed at best as well as Noctua's single tower cooler, if not worse. There were further reasons of course, notably FLOPS per host i.e. density.
Top

I've transitioned almost all of my PC's to Noctua for their CPU heatsink/fan. I still have a lot of less expensive case fans, though. I'm not generally super concerned about how loud my PC's are, but I put a few PC's in my bedroom where I would definitely notice if they're loud, and they've been an acceptable level of noise there.

I have a NH-U12S on a 3950X which I was concerned about being not enough, but it seems fine even with AVX workloads. I am running it with a PPT limit set though which makes a huge difference.

I'm using 2 NH-U12DX's in a dual socket Xeon machine and they're working fantastic. They fit perfect with the spacing of where the processor sockets are and seem to cool those processors fine.

The Chromax black NH-D15 I have on a 3900x actually does look pretty cool, but I try to avoid PC's with windows/visible side panels, so you can't even see it anyways

The NH-D15 is probably overkill for a PPT limited/eco mode Ryzen, but it's nice to have room to upgrade, or change PBO, etc. without having any worries. I also got a pretty good deal on most of them.
Top

Somewhat related, I would like to find 120mm fans that have durability as their main feature. MTBF is not a spec that is found often when shopping for fans. The priorities in order for 90% of my fan needs:

They have dual ball bearings and PWM. The P12 probably also has some air flow. (The F12 may also have moderate air flow as long as there is not much resistance.)

I guess both models also have noise. ;-) Several years ago I replaced Arctic "Freezer 13 CO" CPU coolers in several office computers because of the noise of the ball bearings of the CPU cooler fans. (I also replaced the loud and slow HDDs by SSDs in these computers, and replaced the fans within the PSUs by quieter ones. I don't recall in which order I did the replacements, i.e. at which point the bearings of the CPU cooler fans became noticeable.)

Here is a brand-new test of the FDB variant of P12: igorslab.de

Added in 17 minutes 43 seconds:
PS,
if long life is the topmost consideration, how about the Noctua IP67 rated industrial fan models? They don't have ball bearings, but (a) the bearings are supposed to be long-lived, (b) they have that IP rating which means fully dust tight, and protected against water immersion of 1 meter x 30 minutes.
Top

I have tried extra fractal 14s that come with the cases and extra noctua fans that come on the h14 heatsinks and have bought black extra ones as well. Noctua are nice, but under 1500 the arctic are same noise, but the arctic are more brittle plastic.
Top
Post Reply
7 posts • Page 1 of 1

Return to “Tripping the Breakers”